"You remind me of a young Leslie Caron": interview with Chela Cannon, receptionist on the Space Station

In my quest to uncover all the previously uncredited actresses who appeared in 2001, an important step was accomplished when I bought the rare book "Space Fiction and Space Futures : Past and Present", edited by Eugene Emme (Univelt, 1982). The book featured a long essay wrote by Frederick Ordway, the scientific consultant hired for 2001 by Stanley Kubrick, about his experience in the making of the movie.

The text of the essay had already been available at The Kubrick Site since the late '90s; what was missing were the pictures and the related captions. Through one of those captions (page 65, see image below) I finally found out the name the actress playing Mrs. Turner, the receptionist in the scene where Heywood Floyd gets onboard the Space Station: Chela Cannon (born Chela Matthison). 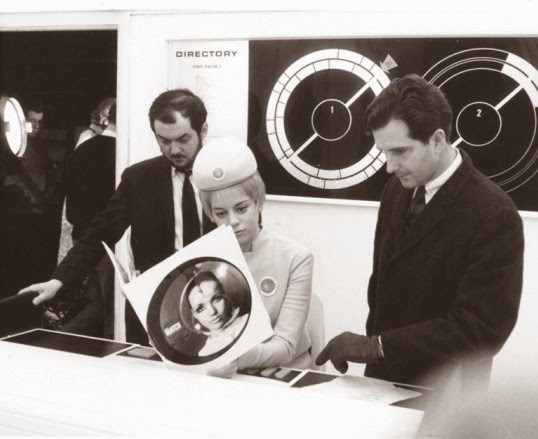 Stanley Kubrick, Chela Cannon and Frederick Ordway on the set of the Space Station Reception. Mrs. Cannon is reading a 2001 issue of 'Paris Match', whose cover was specially designed for the movie by the French magazine. Picture source: bfi.co.uk

After some goggling and with the help of the National Theatre School of Canada I had the chance to interview Mrs. Cannon (she right away wanted to be addressed as Chela that, if you were wondering, is an East Indian word meaning "disciple"), who was very amenable and recalled some anecdotes about her career and her work in 2001.

Chela, could you tell us something about your family and artistic background?

I was born in Vancouver from a family of British origins; I studied in New Westminster and Vancouver, in British Columbia. I was always very fond of acting since I was young: my great-aunt was Edith Wynne Matthison, a stage actress who also appeared on two silent films - she was very famous in her days, she basically introduced Greek drama in North America. She passed away when I was 13, but it was her example that probably gave me the passion for acting.

After the high school I set out to study theatre and I graduated in the first class ever of the National Theatre School of Canada. I later did some TV work in Toronto; some of my first appearances were a CBC drama, More Joy in Heaven with John Vernon, and a documentary produced by the National Film Board of Canada called The Overfamiliar Subordinate (it was the same Board that produced Universe, whose special effects shots inspired Kubrick and whose narrator was Douglas Rain, the eventual voice of HAL.) 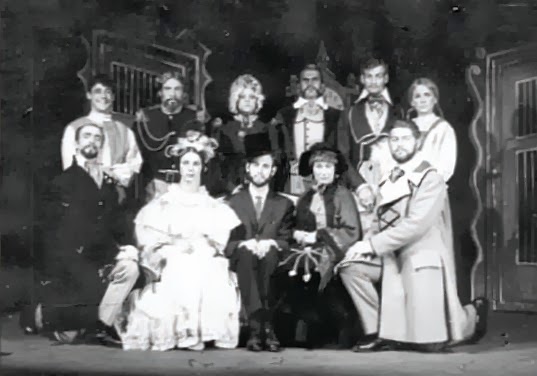 Chela Cannon (third from the left, back row) with the National Theatre School of Canada (Source)

I decided then, looking for more working opportunities, to move to London. I was there with Maurizio Fiorini, a fellow actor. It was during this stay that I participated in the auditioning process for 2001 and then, the actual movie.

How did it your involvement with 2001 come to be?

I guess that my agents of the time, GAC Redway, got me into it. The whole process was unusually lengthy: three months of auditions! There were a lot of girls with me during the auditions, and I never figured out precisely why Mr. Kubrick choose me among all the others. I guess he was looking for a certain "type", a certain profile, some visual inspiration that I might have given him. 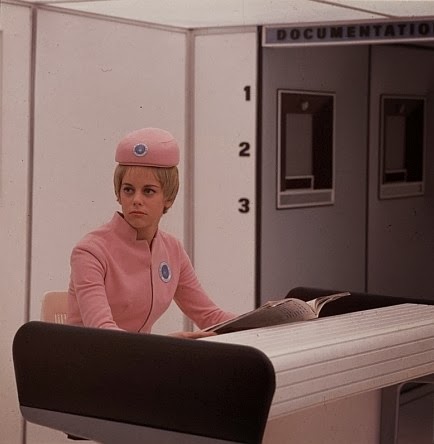 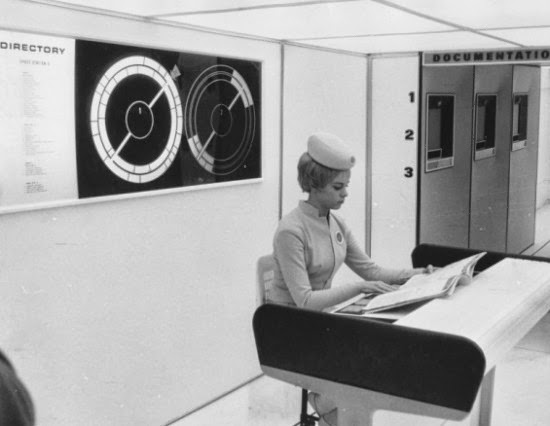 Kubrick was also concerned about the 'sound' of the actresses, I mean their pronunciation. My accent must have suited him better than the others. A friend of mine, Bob Howay, was also chosen for a minor role that was cut from the final edit of the movie.

How long did the experience on 2001 last? What are your recollections about working on the movie and with Stanley Kubrick?

Well, I don't remember the details very well, but I'd say my experience on the set didn't last for more than a week. I started working on it in early 1966.

I remember Kubrick once sat right next to me, and told me "You know, you remind me of a young Leslie Caron". I was speechless! Because, you know, he was not the average flirtatious director, he was very serious and focused on the many details of the job - it was a detail-oriented director. It was probably the only instance in which he spoke personally to me during the shooting process.

I remember working along very well with William Sylvester (Ed. note: the actor who played Heywood Floyd), he was a very nice, considerate man. The whole project was always "hush-hushed", I mean everybody was very secretive about the plot, and we were told not to give away anything to the press. Not that we were precisely aware of it, anyway!

What about the costumes made by Hardy Amies, the famous London designer? They are iconic now.

They were fabulous. I remember I wore a wig while shooting the scenes, with short hair. My natural hair was long and blonde; I'm not quite sure if I would have cut my hair for such a bit part in the movie, but they didn't ask, so... 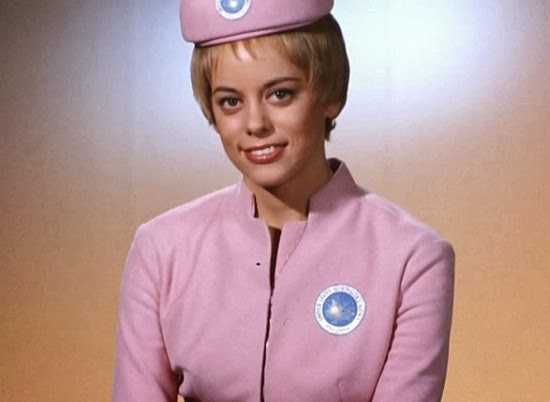 I also remember that Mr. Amies was right there during all the auditioning process, he was very involved with it. We had to walk for him with the costumes on.

I always wondered why some actresses got screen credit and others like you and Maggie London, although you had speaking parts, didn't.

I was very upset about that, and I wasn't even aware of it; for some reasons I didn't see 2001 until years later, in the mid 1970's, so I was told I went uncredited by some friends. I wondered if it was something that had to do with Actor's guild or Unions, but I was young and naive at the time and I didn't care very much about those things. In later years, my son as well tried to figure out what happened.

When I finally had the chance to see the movie I thoroughly enjoyed it - it's an amazing film. My father used to joke with friends that his daughter played one of the apes.. I was very disappointed then, but I now tend to believe that it was just something that slipped by the people involved with the credits, or my agents at the time. Anyway, I guess that nowadays my relationship with the movie I still ambivalent, as no one subsequently cared about trying to fix that. 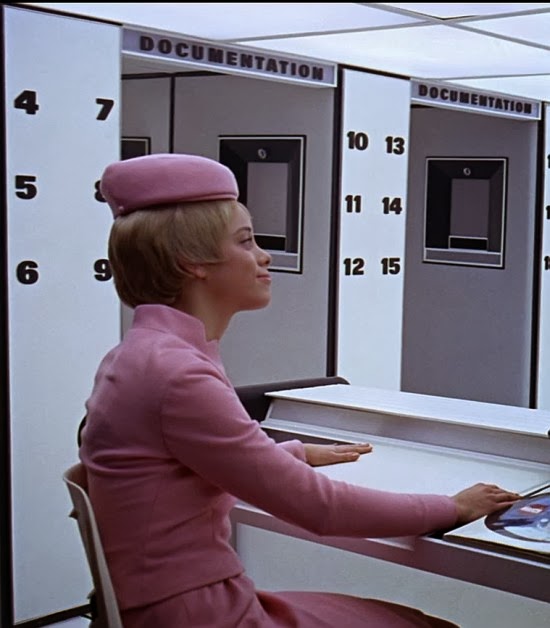 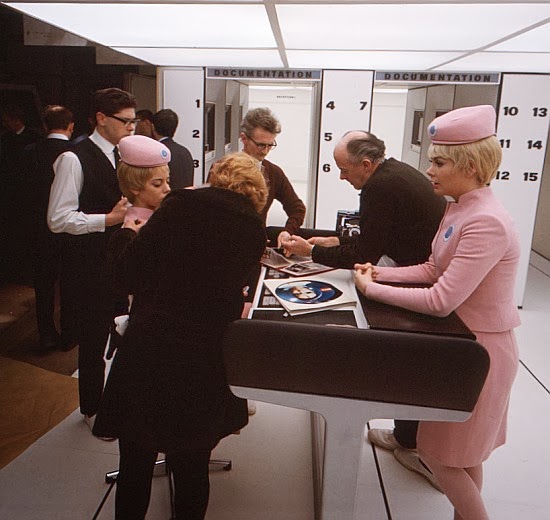 What about your subsequent movie career? I read that in 1967 you took part in another sci-fi movie that also starred Ed Bishop, 2001's lunar shuttle pilot: Battle Beneath the Earth.

I do not remember much about Battle, it must have been a very small role - I didn't ever see the final movie! While in England I did some live TV theatre: two BBC productions, one called Theatre 625 with Nicolas Pennell and Edward Fox, and the other Thirty-Minute theatre. It was terrifying for me, worrying about doing something wrong on live TV. In one of the Theatre 625 productions I had to ride a horse, I can't recall the production name. There was another famous actor with me, John Castle.

I moved back to California in search for other career opportunities and it was then that I got married to Robert, a fighter pilot in the US Navy. We moved back to British Columbia and we have lived here ever since. I was back on TV in 1978 with the movie Who'll Save Our Children? and I have done a lot of commercials in Canada.

I later moved from acting and I worked for years in the real estate business, but I would still love to do movies; it's a flame that never goes off... If there is some young and enterprising director out there, why not?
Condividi