A visit to the Kubrick Archive (London)

Stanley Kubrick was a 'total' filmmaker, one of the few directors in movie history that was personally involved in the complete process of filmmaking, from the initial concept up to the distribution of the finished movie in theaters. This, and the unique opportunity to be able to work mostly from his home (starting in 1965, when he moved permanently to England during the pre-production of 2001), meant that he was able to keep an unusually large quantity of materials produced while working on his movies. Besides that, his large mansion in Hertfordshire enabled him to preserve a vast amount of materials related to his past, present and possible future productions, in order to have them handy in any case. 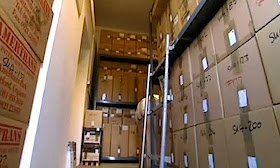 Stanley Kubrick's Boxes in his house in Hertfordshire (photo source)

After his death in 1999, the family was faced with the problem of what to do with over 1.000 boxes of materials (you can have an idea of the amount of stuff stored there by watching Jon Ronson's documentary Stanley Kubrick's Boxes). From a 2013 interview to Kubrick's widow, Christiane:

I was left all of these hundreds and hundreds of boxes of stuff we’d been climbing over all of our lives. There was so much rubbish that came out of each film, and Stanley never tidied it up. It was very melancholy work to go through these things when he was dead, and I was just a basket case, trying to do this.

And then a Frankfurt museum became very interested and they sent an archivist — and that opened my eyes to how to do that, and what would be of value to young people, and also very much [gave me] an awareness that all of these films were made without computers, and so there was so much more documentation. Unfortunately, on computers, much gets lost, while rubbish gets saved forever and ever.

And then we would go through it box by box by box, and we left this to the University of the Arts London, which is a huge university combining all of the other art schools with a vast website. And I thought very carefully who I should leave this to, and I chose them. And then they dedicated a big part of the building — almost a wing — to it, which they decorated like the big wheel in 2001. And so I was happy with all of that. And then following all of these exhibitions, eventually when the exhibitions are finished, it will also go to the university so it will all be in one place, and they’ve dedicated all of the new technical ways of saving every photograph and that sort of thing.

Mrs.Kubrick is referring to the work done by the Deutsches Filmmuseum and the Deutsches Architektur Museum, Frankfurt, that sent archivists researching at the estate at St. Albans, near London, for eight months. This work led to the first Stanley Kubrick exhibition in Frankfurt, in 2004.

The boxes then were moved to the Archives and Special Collections Centre of the University of the Arts London, at the London College of Communication (LCC), Elephant and Castle, in March 2007 and the Stanley Kubrick Archive opened in October of the same year. 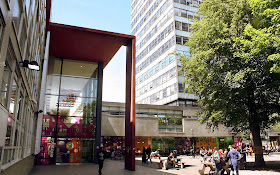 source © 2014 University of the Arts London All Rights Reserved 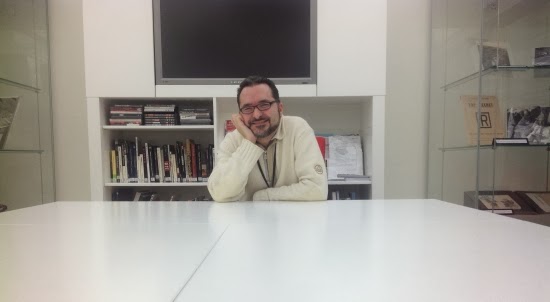 Your humble narrator, pictured on location by an anonymous, very kind fellow visitor of the Archive

Now, coming from a country (Italy) where artistic and cultural assets are managed in a questionable way to say the least, I thought at first that the decision the family made was especially commendable because they decided that the Archive had to be open to the public and for free. That's a remarkable fact by itself, but in another interview Christiane Kubrick (herself an alumna of a branch of the University, St. Martin's School of Art) added a more significant reason:


"I could never have thrown the stuff away. That would have been awful. It is like letting the person die twice if you throw it out. When the Frankfurt museum came, it was a wonderful solution. I saw the material for the first time with an archivist's eyes rather than my own."

Being myself a public librarian, this resonated with me in a particular way. The Archive is, quoting the original press release issued on its opening, the embodiment of Stanley Kubrick's artistic career. Such a considerable and unique collection requires specific skills in treating the different materials: photos and film stills are temperature and light-sensitive, among all things; in general, each item must be handled and stored in the proper way, according to national and international archival standards, in order to guarantee their long-term conservation. This means that the people who have the task to make the Archive work on a daily basis have to be professional archivists, and that's why the University of the Arts situated the Archive in the Special Collections Centre and assigned specific professionals to the task.


In the Archive Richard Daniels, Senior Archivist, and his staff welcome visitors, help them going through the catalogue, hand them the materials and take care of the proper conservation of the items, while providing continuos support to all the cultural events related to the celebration of Kubrick's artistic legacy: the aforementioned exhibition, the many special projections and lectures, the book and documentary projects, etc. 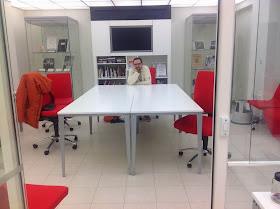 The Search Room of the Archive, beautifully designed in the style of the Hilton Space Station in '2001' by Nightingale Associates with special furniture provided by Working Environments.


My research in the 2001 files stored in the Archive is a perfect example of its mouth-watering contents. Being 'Odyssey' one of the most thoroughly and carefully prepared movies of all time, at the LCC you'll find materials such as:
Here's a few pictures of some sample items stored in the Archive:

Portion of draft script for 2001 that features the use of two HAL computers: 'Other Hal' was meant to explain Hal's murderous behavior (source; courtesy Archive Hub) 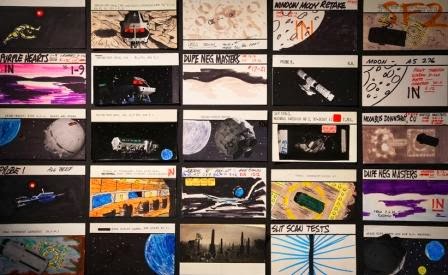 One of the many Sasco cards (filing cards assembled into a chart and used by the special effects department to plan filming and include details such as the direction models should be moved in (source; courtesy Archive Hub)

In conclusion: start saving some money for a trip to London (and book in advance, as the Archive is often fully booked), you won't regret it. Also be sure, before getting there, to check the online catalogue and locate the items you're most interested in, as the staff will take special care in recording your requests and prepare the materials for you for your arrival.

Special thanks to Richard and to assistant archivists Sarah and Charlotte, for their invaluable support and help during my visit. You can get in contact with them at archive-enquiries@arts.ac.uk
Condividi