Welcome to Part 2 of our extended look at ALL the actors that starred in 2001: A Space Odyssey. Today we'll focus on the scenes shot aboard the shuttle Aries-1B.

In ranking order, let's start with the captain, that was played by Ed Bishop, who later starred as the famous Commander Straker in the sci-fi TV series U.F.O. 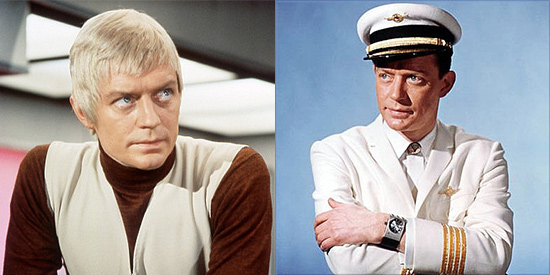 The Aries Captain was not meant to be as silent as it turned out to be: the earlier scripts (here's one) had the character played by Bishop ask Dr. Floyd about the alleged epidemic spreading on the Moon:


PILOT Well, I'll tell you why I ask. You see, I've got a girl who works in the Auditing Department of the Territorial Administrator and I haven't been able to get her on the phone for the past week or so, and with all these stories one hears, I'm a little concerned about her.

FLOYD I see. Well, I'm sorry about that. I wouldn't think there's any cause for alarm.

Those scenes were actually shot, as well as others who saw Bishop discuss Floyd's mission with his co-pilot and one of the hostesses; other sources report that Bishop shoot the same walking-on-the-ceiling scene that ultimately ended being shown on screen and played by Edwina Carroll.

Unfortunately, while editing, Kubrick decided to cut everything else and overlap the bit of dialogue Bishop had with William Sylvester with Strauss' Blue Danube. Perhaps because of that, in several interviews Bishop expressed lukewarm feelings about his experience in the movie (he sounds still somehow baffled about it in the 2001: Making of the Myth documentary, although after Kubrick's death he seemed to have come to terms with it).

Glenn Beck is the Aries co-pilot; curiously, he was a co-pilot as well in Kubrick's 1964 movie Dr.Strangelove. 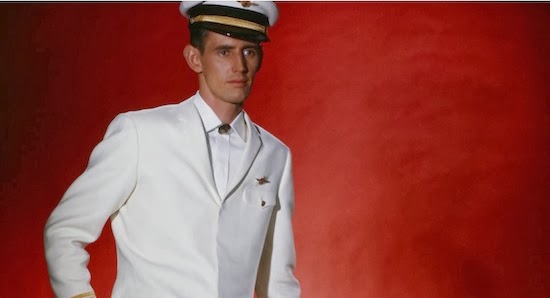 Are the skills required to fly of a B-52 enough to fly a shuttle in space? Kubrick felt that way; Glenn surely looks better in that white uniform! Beck, an experienced canadian actor (a surprising number of actors in 2001 are from Canada) played the role of a bomber co-pilot in another movie, Finders Keepers (1967) where the pilot was 2001's Clavius and Tycho photographer Burnell Tucker.

Edwina Carroll, actress and model with anglo-irish origins born in Yangon (the old Rangoon, in Myanmar) is the hostess who does the famous 'walk on the ceiling' on the Aries.

A professional dancer, Edwina played small but numerous roles in British theatrical and TV productions, starring for instance in The World of Suzie Wang (1961) that had as cinematographer the great Geoffrey Unsworth, who would be 2001's director of photography, and as set decorator a young Liz Moore (that later sculpted 2001's Starchild). 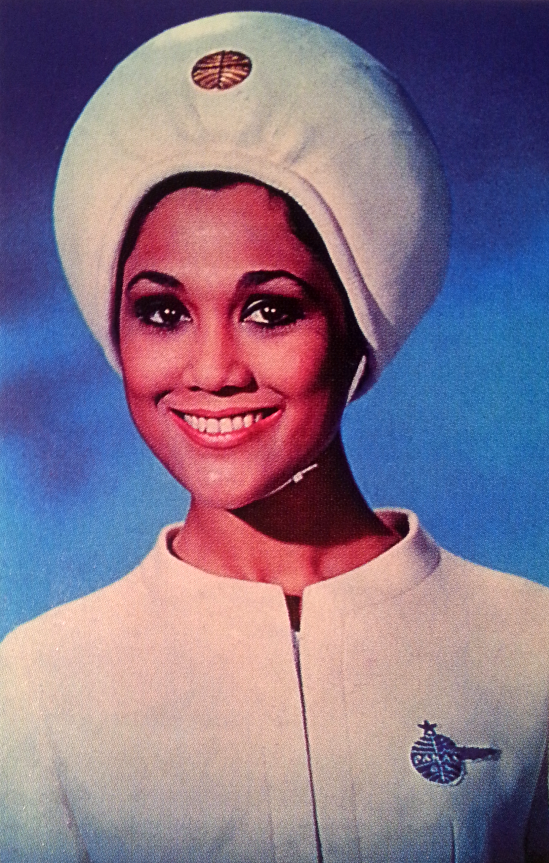 Edwina is remembered by the sci-fi community for her appearance in the first ever episode of 'U.F.O' - Ed Bishop, again - but the general public may remember her for a popular commercial for BMK carpets that run in USA and Great Britain in the late '60s/early 70's.

As in 2001 Edwina is seen talking to another hostess while a judo match is showing on a widescreen TV, I wonder if the BMK ad men choose her for that ad playing on purpose on that association. 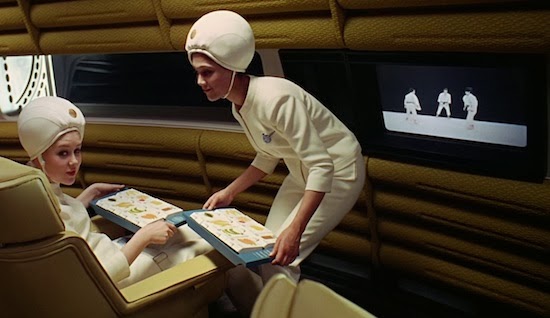 It is also curious to note that Arthur Clarke's book explicitly describes the unnamed Aries hostess as an attractive Bali-born girl:


As Floyd quickly discovered, she came from Bali, and had carried beyond the atmosphere some of the grace and mystery of that still largely unspoiled island. One of his strangest, and most enchanting, memories of the entire trip was her zero-gravity demonstration of some classical Balinese dance movements, with the lovely, blue-green crescent of the waning Earth as a backdrop.

Was Arthur Clarke inspired by her while visiting the movie set or the other way around? Anyway, after quitting the movie business Mrs. Carroll moved permanently to England in 1980 and started two clothing stores in Covent Garden, London.

Talking about that judo match, enter Douglas Robinson, stuntman and actor, who played the referee. 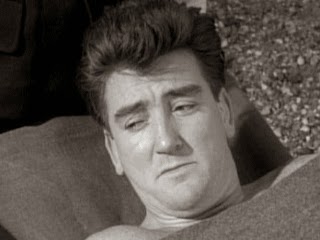 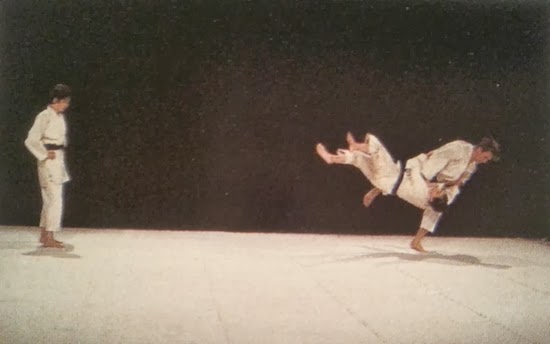 The Robinsons were a famous family of wrestlers; his father and grandfather had been world champions. Along with his brother Joe, Douglas taught actress Honor Blackman some self-defense basic moves during their tenure on The Avengers; Mrs. Blackman would show her newly acquired skills as the infamous Pussy Galore in 007 - Goldfinger.

Here's Douglas with her and a shot from Goldfinger: 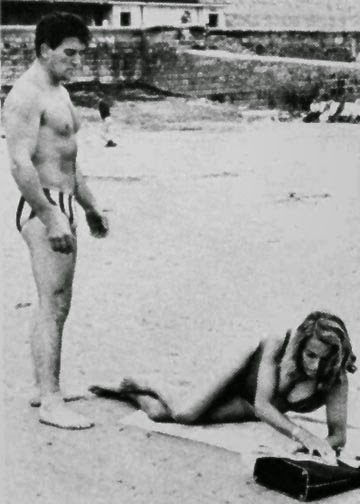 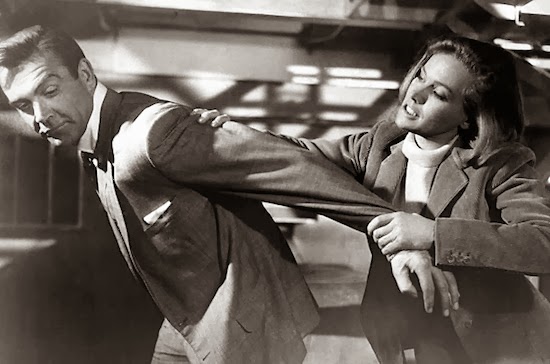 I always suspected it, but the visit at the Kubrick Archive confirmed that the contestants in the judo match were played by two actresses: Anne Blessed and Jennifer Sanders. Couldn't figure out if they were pros or stunt people. 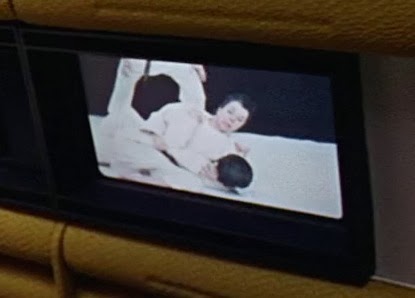 The hostess that is sipping semi-liquid food while watching the judo match on TV is played by Penny Brahms. Born in 1951, she was barely 15 years old when the Aries scenes were shot (early 1966). 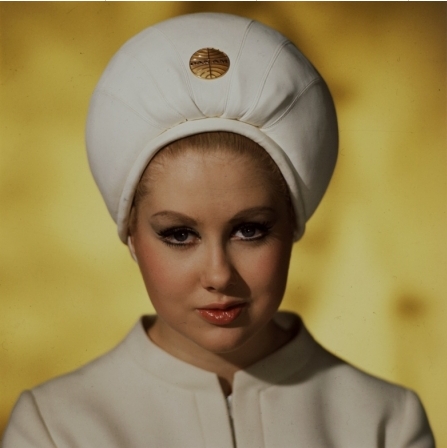 In the excellent book Moonwatcher's Memoir, Dan Richter recounts that before hiring him to play the lead ape-man, Kubrick had tried some experimental ape-man make-up with skinny black teenagers with prosthetics applied. Fearing a potential PR disaster, they moved on to try make-up tests on other people; here's how Keith Hamshere, the movie's still photographer, remember Penny's involvement in the tests:

Then he [Stuart Freeborn] made up Penny Brahms, who played the stewardess in the shuttle to the space station. Penny was a real sport. Stuart made her up and she didn't have much on.

What a scene it must have been! I could fill a website with the story of Penny's adventurous life (and it would be worthy reading it), but for the sake of brevity, here's a revealing anecdote. On July 29, 1969, aged 19, Penny started taking her first ever flying lesson at 9 a.m. Eight hours later she made her first solo flight, becoming Britain's first (and possibly, to date, only) woman to fly solo in one day - and she piloted barefoot!