"2001 between Kubrick and Clarke" is available in english!

The English edition of 2001 between Kubrick and Clarke: The Genesis, Making and Authorship of a Masterpiece by myself and Filippo Ulivieri is out now, with a foreword by 'Moon-Watcher' himself, Dan Richter! 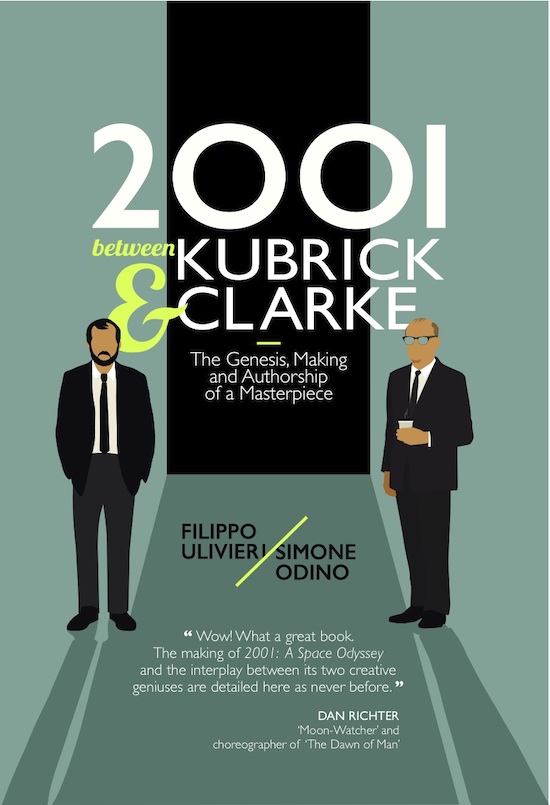 What the book is about:


The story of how 2001: A Space Odyssey came to be made is in many ways as epic as the events portrayed in the film itself—and until now, just as mysterious. In 1964, with Dr. Strangelove ready for release, Stanley Kubrick was uncertain about what his next project would be, and considered making a film dealing with several contemporary themes; it was only when he encountered Arthur C. Clarke that he decided to make a science fiction film. Yet it took more than four years for 2001 to reach the screen—a productive and creative odyssey that involved experimentation, last-minute rethinks, strokes of genius, quarrels, ultimatums, feats of will, and mental breakdowns.

Drawing extensively from never before seen material, including production documents and private correspondences, 2001 between Kubrick and Clarke: The Genesis, Making and Authorship of a Masterpiece gives for the first time a complete account of the two authors’ creative collaboration; one which casts lights on their on-again, off-again relationship, as well as revealing new information about the genesis, production, and reception of the first and most important film about space, the origin of humankind and its destiny among the stars. 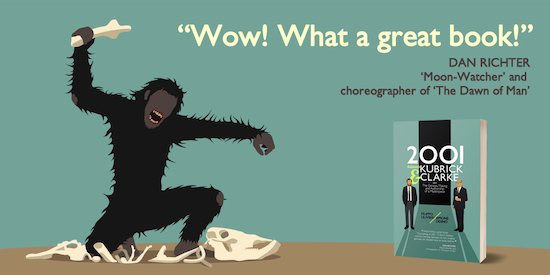 "Wow! What a great book. I was there for over a year and I learned things I didn't know from it. The interplay between Stanley Kubrick and Arthur C. Clarke is detailed as never before. Bravo Filippo and Simone!" -- Dan Richter, 'Moon-Watcher' and coreographer of the 'Dawn of Man' sequence.

"Much like the film itself, this book by two leading Kubrick researchers takes its readers on a journey. By sidestepping the accumulated mythology about the making of 2001: A Space Odyssey and by letting the meticulously researched facts speak for themselves, 2001 between Kubrick and Clarke takes us deep into the creative process behind one of the greatest of all cinematic masterpieces. We are introduced to a wide range of collaborative relationships, none more complex and intriguing than that between Stanley Kubrick and Arthur C. Clarke. Our appreciation of their enormous achievement is enhanced - but as to what it all means, the book, like the film, challenges us to come up with our own answers." -- Peter Krämer, author of the BFI Film Classics volume on '2001: A Space Odyssey'.

Filippo Ulivieri (1977) is Italy's leading expert on Stanley Kubrick. Since 1999, he has been running archiviokubrick.it, a database of factual information about the life and work of Stanley Kubrick. His research on '2001: A Space Odyssey', 'A Clockwork Orange', Kubrick's unrealised films and the myths surrounding his public image have been presented in several international conferences and published in Italian and English. He is the author of Stanley Kubrick and Me: Thirty Years at His Side (Arcade Publishing, 2016), the biography of Emilio D'Alessandro, personal assistant to the director. He is co-writer of S is for Stanley (Alex Infascelli, 2015), winner of the David di Donatello award for Best Documentary Feature.

Simone Odino (1974) works as a librarian in Bologna. For the past five years he has been researching '2001: A Space Odyssey', visiting archives in the U.S., England and Italy and interviewing cast and crew members. This book was possible thanks to his visit to the 'Arthur C. Clarke Collection of Sri Lanka' at the Smithsonian Air & Space Museum. He gave papers in the conferences 'Stanley Kubrick: A Retrospective' (De Montfort University, Leicester, 2016) and 'Stanley Kubrick: Nouveaux Horizons' (Université Bordeaux Montaigne, Bordeaux, 2017), and was a guest speaker at the event 'Kubricks 2001: 50 Jahre A Space Odyssey' (Deutsches Filmmuseum, Frankfurt am Main, 2018). He has been running the website 2001italia.it since 2013.


The book is available worldwide through Amazon, and in the United States in classic book shops, too.